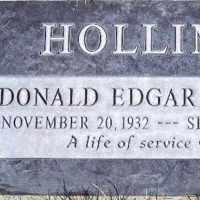 The Life of Donald Edgar

When Donald Edgar Holliman was born on 20 November 1932, in Price, Carbon, Utah, United States, his father, Edgar Ephraim Holliman, was 23 and his mother, Milda Marguerite Johnstun, was 19. He lived in World for about 25 years. He died on 17 September 1994, in Provo, Utah, Utah, United States, at the age of 61.

Put your face in a costume from Donald Edgar's homelands.