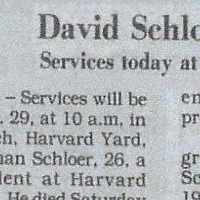 The Life of David Hartman

Put your face in a costume from David Hartman's homelands.

The Twenty-third Amendment gives the residents in the District of Columbia the right to vote in presidential elections and to give the district electors in the Electoral College.
1964

During the summer of 1964, racially charged riots broke out from frustrated Negro communities across the nation. In New Jersey, three cities were impacted: Jersey City (from August 2 - 4), Paterson (from August 11 - 13) and Elizabeth (also August 11 - 13). Between the three locations, 60 people were injured and 135 were arrested; over 108 stores were damaged. The fundamental causes of the riots were linked to job scarcity, insufficient schooling opportunities, and resentment of police authority.
1968

Dutch: nickname for a gourmandizer, a loan word from Middle High German slemmer.