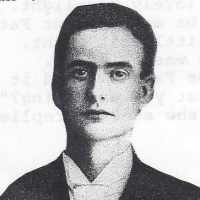 Swiss German: topographic name for someone living high on a mountainside, from German ab- ‘below, off’ + Planalp ‘high, flat mountain-meadow’.