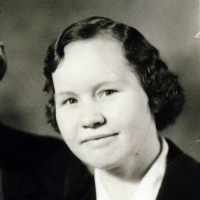 The Life Summary of Dessie Clorene

Put your face in a costume from Dessie Clorene's homelands.

Joseph Franklin Moffett was born in 1900 in the Mormon colonies in Chihuahua, Mexico, the son of Joseph Ammon and Annie Maria Johnson Moffett. He married Dessie Clorene Allred (b. 1907), daughter of N …