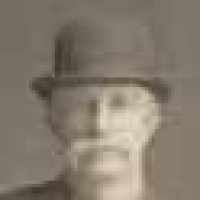 The Life Summary of Walter B

When Walter B Wickham was born on 9 February 1852, in East Wickham, Kent, England, his father, John Wickham II, was 50 and his mother, Sarah Andrews, was 40. He married Annie Marie Kjaer on 3 April 1871, in Endowment House, Salt Lake City, Salt Lake, Utah, United States. They were the parents of at least 1 son and 1 daughter. He lived in East Wickham, Kent, England, United Kingdom for about 10 years. He died on 26 April 1917, in Brigham City, Box Elder, Utah, United States, at the age of 65, and was buried in Teton-Newdale Cemetery, Madison, Idaho, United States.

Put your face in a costume from Walter B's homelands.

English (southeastern): habitational name from any of various places called with Old English wīc ‘specialized farm, dairy farm’ + hām ‘homestead’, such as Wicham (Kent), Wickham (Berkshire, Essex, Hampshire), Wickhambreux (Kent), Wickhambrook (Suffolk), Wyckham (Sussex), Wycomb (Leicestershire), or Wykeham (Lincolnshire, North Yorkshire). Perhaps also from High Wycombe and West Wycombe (both Buckinghamshire), which had forms in -ham from the 16th century. In some instances, however, wīc-hām is associated with a Romano-British town, and wīc is an adaptation of Latin vicus. This is the case for Wickhambrook in Suffolk, the Roman association probably being the Roman villa at nearby Lidgate. Similarly, Wickham Market, also in Suffolk, is associated with a large Roman settlement in nearby Hacheston. The surname is now also common in Ireland (Wexford), where it was taken in the 17th century.History: Thomas Wickham is recorded as a freeman of Weathersfield, CT, in 1658.

An excerpt from "A life story of Gertrude Marie Pedersen" by her Grandson, Dr. Clarence C. Jensen Annie Marie Kjer Wickham was born September 25, 1850, at Sundby Sogn,Denmark, a small place not …