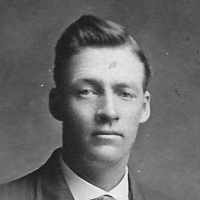 The Life Summary of Henry Simmons

Put your face in a costume from Henry Simmons's homelands.

English: from the personal name Gibb, a pet form of Gilbert (compare Gibbs ). This surname is also frequent in Scotland.

I Henry Simmons Gibb was born in Lehi, Utah , Nov. 26, 1881. I am now 71 years of age and as I look back over my life, I remember many things that have happened, and many people who have come and gone …