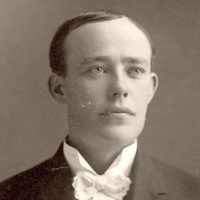 Put your face in a costume from Axel Edward Lundquist's homelands.

As a little boy, Axel's widowed mother hated the Mormon church and whipped her little boy for stealing from a woman boarder whose money disappeared from beneath her mattress. He hadn't taken the mone …