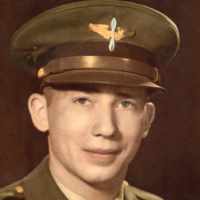 The Life Summary of Raymond Forster

When Raymond Forster Angerbauer was born on 16 July 1920, in Salt Lake City, Salt Lake, Utah, United States, his father, John Angerbauer, was 38 and his mother, Hedwig 'Hattie' Alvine Kerner, was 31. He married Deloris Irene Varney on 23 June 1946, in Evanston, Uinta, Wyoming, United States. He registered for military service in 1942. He died on 18 August 2016, in Mohave, Arizona, United States, at the age of 96.

Put your face in a costume from Raymond Forster's homelands.

From an Old French name, Raimund, of Germanic origin, from ragin ‘advice, decision’ + mund ‘protector’. This was adopted by the Normans and introduced by them to Britain. Subsequently it dropped out of use, but was revived in the middle of the 19th century, together with several other given names of Old English and Norman origin.

A letter to Ella Angerbauer from Raymond Angerbauer. This letter is taken from "Addendum to History of the Johann and Caroline Angerbauer Family" Entered by Sarah Buss, Ella's great-granddaugh …