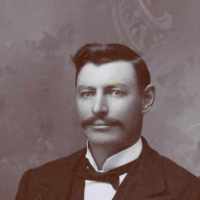 When William Henry Carbine was born on 29 March 1871, in Clarkston, Cache, Utah, United States, his father, William Van Orden Carbine, was 36 and his mother, Sarah Jane Miller, was 22. He married Gertrude Evelyn Staley on 19 December 1900, in Salt Lake City, Salt Lake, Utah, United States. They were the parents of at least 6 sons and 4 daughters. He immigrated to Canada in 1907 and lived in Fort Macleod, Willow Creek No. 26, Alberta, Canada for about 15 years. He died on 5 April 1954, in Kalispell, Flathead, Montana, United States, at the age of 83, and was buried in Ronan, Lake, Montana, United States.

"The fort was built as a 70 by 70 meters square (233 by 233 ft) on October 18, 1874. Fort Macleod was originally established in 1874 on a peninsula along the Oldman River, then moved in 1884 to the present town location In 1906 a fire devastated the downtown and destroyed most of the wooden buildings. From 1906 to 1912 Macleod had its greatest period of growth, as more new brick and stone building replaced the destroyed wooden ones. Then in 1912 the CPR moved the divisional point and 200 jobs to Lethbridge, devastating the local economy. Fort Macleod ceased to grow, and in 1924 was forced to declare bankruptcy. Until the 1970s, the town's economy stagnated and the buildings from the turn-of-the-century remained untouched.[9] In 1978 Alberta Culture started to inventory the downtown buildings, and in 1982 the downtown became Alberta's first ""Provincial Historic Area"". As well, Heritage Canada started a Main Street Restoration Project in 1982, aiming to preserve the sandstone and brick buildings, some dati"

William Van Orden Carbine, a patriarch in the Union Stake of Zion and a resident of La Grande, Oregon, was born February 17, 1835, at Cairo, Greene County NewYork, the son of Edmund Z. Carbine and Ade …