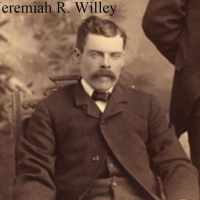 The Life Summary of Jeremiah Russell

Put your face in a costume from Jeremiah Russell's homelands.

English: from a pet form of the personal name Will , a short form of William . In some instances a variant of Wiley .Americanized form of Swiss German Willi .History: Isaac Willey is recorded in Boston, MA, in 1640, and went on to be one of the founders of New London, CT. His descendent Samuel Hopkins Willey (1821–1914) was one of the founders of the College of California at Berkeley in 1860.