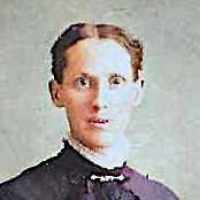 When Phoebe Ellen Treseder was born on 7 September 1844, in Saint Helier, Jersey, her father, Richard Doughty Treseder, was 31 and her mother, Elizabeth McKay, was 32. She married Isaac Franklin Wayne Eades on 19 December 1863, in Salt Lake City, Salt Lake, Utah, United States. They were the parents of at least 2 sons and 1 daughter. She lived in St Saviour, Jersey in 1851 and Omaha, Douglas, Nebraska, United States in 1870. She died on 28 June 1897, in Battle Mt., Lander, Nevada, United States, at the age of 52, and was buried in Battle Mt., Lander, Nevada, United States.

Put your face in a costume from Phoebe Ellen's homelands.

Phoebe Ellen Treseder was born on 7 September 1844 in St. Helier, Jersey,Channel Island to Richard Doughty and Elizabeth McKayTreseder. She was the seventh of thirteen children, seven girls and six b …