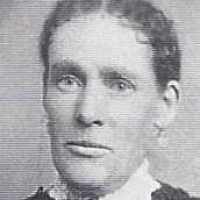 Put your face in a costume from Sarah Ann Stennett's homelands.

Sarah Ann was born 27 August 1847 at Moulton, Lincolnshire, England, the daughter of William and Sarah Stennett Poppleton. Factual information concerning her early life and that of her parents is tak …