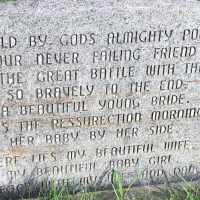 Put your face in a costume from Anna "Annie" Gordon's homelands.

Scottish: Anglicized form of Gaelic Mac an tSaoir ‘son of the craftsman’. Compare Irish McAteer .History: This is the name of a Scottish clan which, according to clan lore, is descended from Maurice MacNeil, a nephew of Somhairle (English: Sorley or Somerled), King of the Isles (died 1164).

I, Thomas Dobson, was born in the town of Maccelsfield, Cheshire, England February 19, 1837. When I was three years old my parents received the Gospel of Jesus Christ and soon after my father came a …