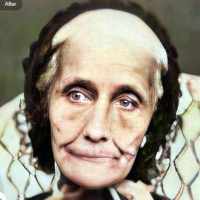 The Life Summary of Catherine Vanever

Put your face in a costume from Catherine Vanever's homelands.

Some characteristic forenames: German Hans, Franz, Kurt, Otto, Frieda, Horst, Arno, Bernhardt, Ernst, Erwin, Gerhard, Hannelore.German:nickname for a greedy or rapacious person, from Middle High German and Middle Low German gīr(e) ‘large bird of prey, vulture’, or a topographic or habitational name referring to a house identified by the sign of a bird of prey.

My Story by Martha Ann Gardner

Missed spelled words are hers Hand written note's from the Peterson's Records BIOGRAPHY: I Martha Ann Tuttle was born June 8, 1829, in Boston, Massachu …