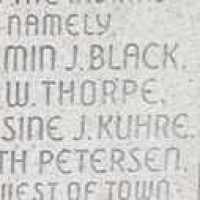 The Life Summary of William Washington

When William Washington Thorpe was born on 17 July 1823, in Derbyshire, England, United Kingdom, his father, Thomas Thorpe, was 27 and his mother, Ann Storer, was 27. He married Hannah Fenerly about 1844, in Washington, Durham, England, United Kingdom. He lived in St. Louis, St. Louis, Missouri, United States in 1850 and Spring City, Sanpete, Utah, United States in 1860. He died on 17 October 1865, in Ephraim, Sanpete, Utah, United States, at the age of 42.

Put your face in a costume from William Washington's homelands.

English (mainly Yorkshire and Lancashire): from Middle English thorp(e) ‘village, hamlet, farmstead’ (Old Norse, Old English thorp ‘secondary settlement’). The surname may be topographic, for someone who lived in such a settlement, or habitational, for someone from any of several places called Thorp(e), which are most frequent in Yorkshire, the Midlands, and East Anglia. Compare Throop .

Transcript Transcript for Manuscript history of the John E. Forsgren Emigrating Company: Thursday, May 19. At noon we left our camp in Keokuk, and in the evening made camp ten English miles out. Fri …