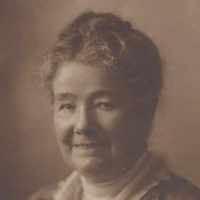 When Catherine Anne "Ann" Edwards was born on 23 May 1844, in Merthyr Tydfil, Glamorgan, Wales, United Kingdom, her father, John Edwards, was 27 and her mother, Margaret Roberts, was 21. She married Edward Williamson Nelson on 25 May 1859. They were the parents of at least 7 sons and 7 daughters. She lived in Logan, Cache, Utah, United States in 1900 and Judicial Township 8, Fresno, California, United States in 1910. She died on 19 February 1925, in Alameda, Bannock, Idaho, United States, at the age of 80, and was buried in Logan Cemetery, Logan, Cache, Utah, United States.

Put your face in a costume from Catherine Anne "Ann"'s homelands.