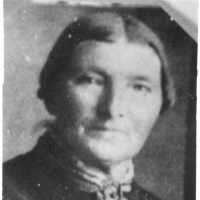 The Life Summary of Oline Elisabeth

When Oline Elisabeth Jørgensdatter was born on 19 February 1816, in Brahetrolleborg, Sallinge, Svendborg, Denmark, her father, Jørgen Pedersen Cornbeck, was 31 and her mother, Johanna Sophia Johansen, was 37. She married Peder Hansen on 16 May 1840, in Vejle, Sallinge, Svendborg, Denmark. They were the parents of at least 2 sons and 2 daughters. She lived in Pårup, Odense, Odense, Denmark in 1860 and Utah, United States in 1870. She died on 14 March 1899, in Fillmore, Millard, Utah, United States, at the age of 83, and was buried in Fillmore, Millard, Utah, United States.

Put your face in a costume from Oline Elisabeth's homelands.

In the Middle Ages this represented a contracted form of Adeline . In modern use it is either a revival of this or a respelling of Aileen . In Scotland and Ireland it has sometimes been chosen as representing an Anglicized spelling of the Gaelic vocabulary word àlainn (Scottish), álainn (Irish), meaning ‘lovely’.