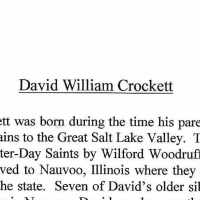 Murder of David Crockett (Alvin was Sheriff at the time)

Notes on Charles Benson Excerpts from F. Ross Peterson, A History of Cache County (Utah Centennial County History Series), 95–99 . . . On one earlier occasion those who enforced the laws lost contro …