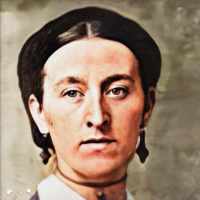 The Life Summary of Phebe "Jane"

Put your face in a costume from Phebe "Jane"'s homelands.

About 175 individuals were in the company when it began its journey from the outfitting post at Kanesville, Iowa (present day Council Bluffs). The company arrived at various times between 21 Septembe …