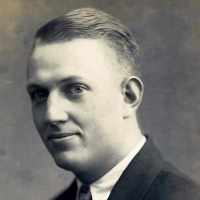 The Life Summary of Merril Ralph

Put your face in a costume from Merril Ralph's homelands.

1910 · The Lehi Tabernacle Is Completed

The beautiful Lehi Tabernacle was completed and dedicated by Joseph F. Smith on May 15, 1910. The white brick building was able to seat 1,200 people. A 9-ton, 19 foot high, pipe organ was the crowning feature of the building. The massive organ cost $3,700 and had a total of 792 pipes. The tabernacle was a jewel in the community.

A Tribute to Merril

Taken from BIOGRAPHY OF EDNA MYRTLE HACKETT BANKS BY her sister, May H. Marsh "Merril was a perfect type of splendid manhood and those of us who knew him can understand in part, the loss his loved on …