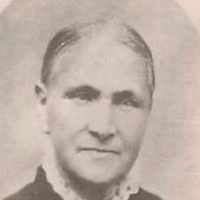 English (of Norman origin): from the Old French and Middle English personal name Hervei, also found as Herveu, Hervé, and Hervi. The name Herveu or Herv(e)i was borne by a number of Bretons at the Norman Conquest and, as such, represents a French form of the Old Breton name Hoiearnviu or Hærviu (see Herve ). Among Normans Herve(i) or Herv(e)i was also a French form of ancient Germanic Hariwic, Herewic (from hari ‘army’ + wīg ‘war’), with intervocalic /w/ becoming /v/ in Old French. The Breton and ancient Germanic names were commonly Latinized as Herve(i)us and Hervic(i)us respectively but, since their most common vernacular forms in Old French were indistinguishable, the Latin forms were also sometimes interchangeable, especially Herveus.

Irish: shortened Anglicized form of Gaelic Ó hAirmheadhaigh ‘descendant of Airmheadhach’, a personal name probably meaning ‘esteemed’. It seems to be a derivative of Airmheadh, the name borne by a mythological physician.

Sarah Ingersoll Harvey (Floyd) Holmes Obituary by Amy Cook It is with feelings of sadness we announce the death of Sister Sarah Holmes, who died of heart disease at her residence in St. Charles, Ida …

Put your face in a costume from Sarah Ingersoll's homelands.