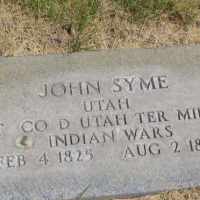 When John Syme was born on 4 February 1825, in Clackmannan, Clackmannanshire, Scotland, United Kingdom, his father, William Syme, was 37 and his mother, Grizzel Marshall, was 41. He married Barbara Wyley on 1 March 1847, in Kilbirnie, Ayrshire, Scotland, United Kingdom. They were the parents of at least 6 sons and 1 daughter. He lived in Perry, Illinois, United States in 1860. He died on 2 August 1894, in Moroni, Sanpete, Utah, United States, at the age of 69, and was buried in Moroni City Cemetery, Moroni, Sanpete, Utah, United States.