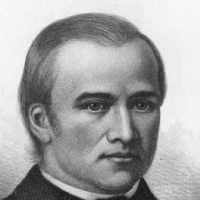 The Life Summary of Newel Kimball

Put your face in a costume from Newel Kimball's homelands.

English: habitational name from Whitney in Herefordshire, the etymology of which is uncertain. The second element is Old English ēg ‘island, piece of higher ground in a low-lying area’; the first appears to be hwītan, which is either the genitive singular of an Old English byname Hwīta (meaning ‘white’), or the weak dative case (originally used after a preposition and article) of the adjective hwīt ‘white’. The name may also derive from Whitney (now Whitney Wood) in Stevenage (Hertfordshire), probably named from Old English hwītan ‘white’ + (ge)hæge ‘enclosure’.History: John Whitney came from London, England, to Watertown, MA, in 1635, and had numerous prominent descendents.

"Our Travels Beyond the Mississippi" By Helen Mar Kimball Whitney