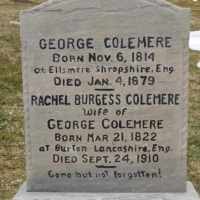 The Life Summary of George Horne

When George Horne Colemere was born on 6 November 1814, in Ellesmere, Shropshire, England, United Kingdom, his father, John Colemere, was 55 and his mother, Elizabeth Pickering, was 41. He married Rebecca Hill on 21 May 1843, in Nauvoo, Hancock, Illinois, United States. They were the parents of at least 2 sons and 1 daughter. He died on 4 January 1879, in Kaysville, Davis, Utah, United States, at the age of 64, and was buried in Salt Lake City, Salt Lake, Utah, United States.

Put your face in a costume from George Horne's homelands.

Via Old French and Latin, from Greek Georgios (a derivative of geōrgos ‘farmer’, from gē ‘earth’ + ergein ‘to work’). This was the name of several early saints, including the shadowy figure who is now the patron of England (as well as of Germany and Portugal). If the saint existed at all, he was perhaps martyred in Palestine in the persecutions of Christians instigated by the Emperor Diocletian at the beginning of the 4th century. The popular legend in which the hero slays a dragon is a medieval Italian invention. He was for a long time a more important saint in the Orthodox Church than in the West, and the name was not much used in England during the Middle Ages, even after St George came to be regarded as the patron of England in the 14th century. Its use increased from the 1400s, and by 1500 it was regularly among the most popular male names. This popularity was reinforced when George I came to the throne in 1714 , bringing this name with him from Germany. It has been one of the most popular English boys' names ever since.