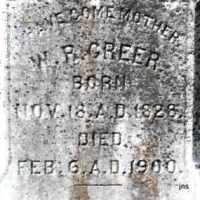 Put your face in a costume from William Reddick "Bill"'s homelands.

From "The Greer (Grier) Frontiersmen and Related Families" Volume 1, page 329

As far as is known, William never married. He took part in the family migration to Utah in 1855, and although he definitely returned to Texas, it is uncertain whether he did so in 1856 with most of h …