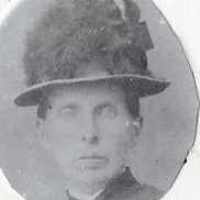 Altered form of French D'Épernon: topographic name shortened from the title duc d'Epernon, which refers to Épernon, a place in Eure-et-Loir, France. Compare Apperson 2 and Efferson .Possibly also Scottish, Irish, or English: variant of Apperson 1. This form of the surname is virtually non-existing in Britain.History: The majority of the American bearers of the surname Epperson trace their origin to John Epperson, who arrived in North America together with his wife Elizabeth and namesake son from England in 1675, and settled in New Kent County, VA. He was reportedly a son of the French nobleman Bernard de Nogaret de La Valette, duc d'Epernon, born in 1638 on his father's way into political exile in England. In England he adopted an altered form of his father's title, Epperson, as a surname. John Epperson married twice: first Sara Rémon in 1656, in Jersey (Channel Islands); second, Elizabeth Beard, in 1671, in England.

Written by her grandson, Glen W. Busenbark Martha Jane Epperson was born 6 August, 1831, in Montgomery County Indiana. She was the daughter of Elias Epperson and Nancy Lunica Dalton. Montgomery Cou …