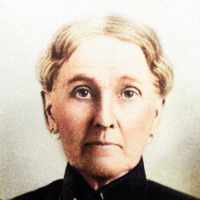 The Life Summary of Ann Lyons

When Ann Lyons Thompson was born on 6 April 1826, in Ireland, her father, Samuel Thompson, was 46 and her mother, Sarah Lyons, was 45. She married John Sharp McAffee about 1840. They were the parents of at least 5 sons and 4 daughters. She immigrated to United States in 1864 and lived in Greenock, Renfrewshire, Scotland, United Kingdom in 1842 and Bonhill, Dunbartonshire, Scotland in 1861. She died on 15 November 1903, in Lehi, Utah, Utah, United States, at the age of 77, and was buried in Lehi City Cemetery, Lehi, Utah, Utah, United States.

Put your face in a costume from Ann Lyons's homelands.