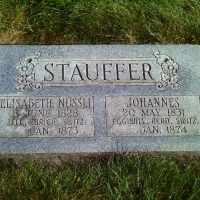 South German:occupational name for a maker or seller of beakers or mugs, from an agent derivative of Middle High German stouf ‘beaker, stoup’.habitational name for someone from any of various minor places called with this word, for example Stauf, Staufen; the reference is to hills thought to resemble a beaker in shape. Compare Stouffer .

Excerpts From Talk Given at Bertha Stauffer's Funeral

From talk given at Bertha Stauffer's funeral by Marie Barker Ward Contributed By terrieleetreft1 · 2013-05-05 Bertha's mother, Elizabeth Nussli, left Switzerland along with a brother and a sister, …