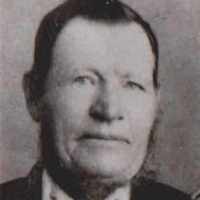 When Gustaf Johnson was born on 23 July 1821, in Göteve, Skaraborg, Sweden, his father, John Ericson, was 26 and his mother, Maria Wesberg, was 22. He married Louisa Eriksson on 25 March 1845, in Ulricehamn, Älvsborg, Sweden. They were the parents of at least 5 daughters. He died on 14 December 1910, in Heber City, Wasatch, Utah, United States, at the age of 89, and was buried in Heber City Cemetery, Heber City, Wasatch, Utah, United States.

Put your face in a costume from Gustaf's homelands.

U.S. acquires vast tracts of Mexican territory in wake of Mexican War including California and New Mexico.
English and Scottish: patronymic from the personal name John . As an American family name, Johnson has absorbed patronymics and many other derivatives of this name in continental European languages. (For forms, see Hanks and Hodges 1988 .)