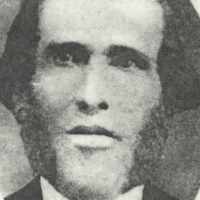 When John Aaron Roby Gibbons was born about 1794, in Chieveley, Berkshire, England, United Kingdom, his father, William Gibbons, was 37 and his mother, Dorothy Head, was 44. He married Fanny Roby on 15 August 1818, in Mapledurham, Oxfordshire, England. They were the parents of at least 9 sons and 1 daughter. He immigrated to New Orleans, Orleans, Louisiana, United States in 1854 and lived in Staffordshire, England, United Kingdom in 1851. He died on 14 March 1872, in Ogden, Weber, Utah, United States, at the age of 78, and was buried in Ogden City Cemetery, Ogden, Weber, Utah, United States.

Put your face in a costume from John Aaron Roby's homelands.