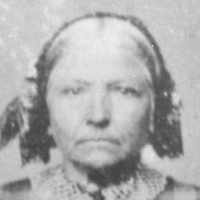 The Life Summary of Harriet Matilda

When Harriet Matilda Daniel was born on 12 March 1805, in Burslem, Staffordshire, England, United Kingdom, her father, Burslem Daniel, was 25 and her mother, Mary, was 34. She married Samuel Johnson on 12 August 1822, in Bucknall, Staffordshire, England, United Kingdom. They were the parents of at least 7 sons and 3 daughters. She lived in American Fork, Utah, Utah, United States in 1880. She died on 16 January 1885, at the age of 79, and was buried in American Fork Cemetery, American Fork, Utah, Utah, United States.

Put your face in a costume from Harriet Matilda's homelands.

English, French, Spanish, Portuguese, German, Polish, Czech, Slovak, Romanian, Jewish, Assyrian/Chaldean, West Indian (mainly Haiti), and African (mainly Nigeria and Tanzania); Breton (rarely Le Daniel); Hungarian (Dániel): from the Biblical personal name Daniel, Syriac (Assyrian/Chaldean) Dānīʾēl, Hungarian Dániel (from Hebrew Daniyyel ‘God is my judge’), borne by a major prophet in the Bible. The chief factor influencing the popularity of the personal name (and hence the frequency of the surname) was undoubtedly the dramatic story in the Book of Daniel recounting the prophet's steadfast adherence to his religious faith despite pressure and persecution from the Mesopotamian kings in whose court he served: Nebuchadnezzar, Belshazzar, and Darius. The name was also borne by a 2nd-century Christian martyr and by a 9th-century hermit, the legend of whose lives were popular among Christians during the Middle Ages. Among Orthodox Christians in Eastern Europe the name was also popular as being that of a 4th-century Persian martyr, who was venerated in the Orthodox Church. In France, this surname is most common in Brittany.Irish (Tipperary and Waterford): shortened form of McDaniel , which is actually a variant of McDonnell , from the Gaelic form of Irish Donal (equivalent to Scottish Donald), erroneously associated with the Biblical personal name Daniel. See also O'Donnell .Americanized or Germanized form of Slovenian Danijel: from the Biblical personal name Danijel ‘Daniel’ (see 1 above).

A Life Sketch - as told to her family Esther Ann Robinson was the wife of William James Whitehead and the daughter of Samuel Gregory Robinson and Esther Ann Bourne. Born September 6, 1856 at American …