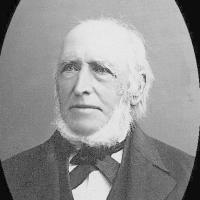 When Robert Chapman was born on 1 December 1809, in Diss, Norfolk, England, United Kingdom, his father, George Chapman, was 21 and his mother, Dinah Johnson, was 21. He married Harriet Wyatt in August 1849, in England, United Kingdom. They were the parents of at least 2 sons and 1 daughter. He died on 22 February 1891, in Ogden, Weber, Utah, United States, at the age of 81, and was buried in Ogden City Cemetery, Ogden, Weber, Utah, United States.

English: occupational name for a merchant or trader, Middle English chap(pe)man, chepman, Old English cēapmann, cēpemann, a compound of cēap ‘barter, bargain, price, property’ + mann ‘man’.Jewish: adopted probably for a like-sounding or like-meaning name in some other European language; see for example Kaufman .History: This name was brought independently to North America from England by numerous different bearers from the 17th century onward. John Chapmen (sic) was one of the free planters who assented to the ‘Fundamental Agreement’ of the New Haven Colony on June 4, 1639.