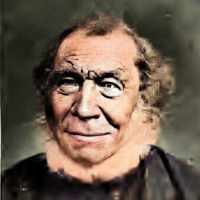 The Life Summary of Soren

When Soren Christensen Thura was born on 17 December 1796, in Harridslev, Vennebjerg, Hjørring, Denmark, his father, Christen Laursen Spange, was 47 and his mother, Maren Sorensen, was 38. He married Mette Laursdatter on 26 November 1822, in Harridslev, Sejlstrup, Denmark. They were the parents of at least 2 sons and 5 daughters. He lived in Vejby, Vejby, Børglum, Hjørring, Denmark in 1860 and Vejby, Børglum, Hjørring, Denmark in 1860. He died on 28 December 1877, in Ephraim, Sanpete, Utah, United States, at the age of 81, and was buried in Ephraim, Sanpete, Utah, United States.

Put your face in a costume from Soren's homelands.

Soren Christensen was born December 17, 1796, at Harridslev, Hjorring, Denmark. He was the son of Christen Laursen Spang and Maren Sorensdatter Thura. He used the name Thura when he came to America to …