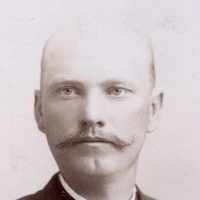 Put your face in a costume from John Arvid Andersson's homelands.

Logan City was recognized as a city in the Territory of Utah, seven years after its founding.