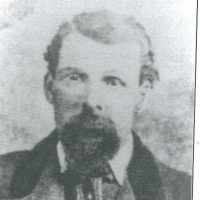 The Life Summary of William Evan

When William Evan Price was born on 7 June 1839, in Presteigne, Herefordshire, England, United Kingdom, his father, William Preece, was 37 and his mother, Mary Ann Pugh, was 45. He married Rhoda Jane Stone on 27 February 1864, in Salt Lake City, Salt Lake, Utah, United States. They were the parents of at least 6 sons and 4 daughters. He lived in Brilley, Herefordshire, England, United Kingdom in 1841 and Salt Lake, Utah, United States in 1860. He died on 18 September 1903, in Idaho Falls, Bingham, Idaho, United States, at the age of 64, and was buried in Ucon Cemetery, Ucon, Bonneville, Idaho, United States.

Put your face in a costume from William Evan's homelands.

William Evan (Preece) Price was born on 7 June 1839 in Presteigne, Herfordshire, England to William and Mary Ann Pugh Preece. He was the youngest of five children, one girl and four boys, all born i …