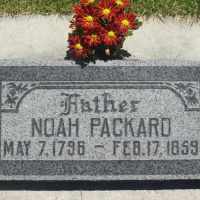 The Life Summary of Noah

Put your face in a costume from Noah's homelands.

Conversion Story of Noah Packard (written by his own hand)

This brings me down to the 35th year of my age, during which time neither I nor my wife had ever made any profession of religion; yet a member of the Baptist Church who lived neighbor to us, thought w …