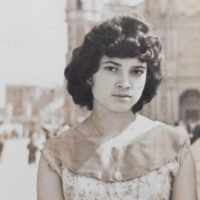 The Life of Luz María Albertina

When Luz María Albertina González Martínez was born on 8 April 1943, in Mexico City, Mexico, her father, Luis González de la Vega Estrada, was 71 and her mother, Maria Antonia Dolores Martínez Cruz, was 37. She married Pablo Flores Zuñiga on 9 October 1960, in Tlalnepantla, Tlalnepantla de Baz, Mexico, Mexico. She died on 13 April 2010, in her hometown, at the age of 67.

Put your face in a costume from Luz María Albertina's homelands.

In 1947, Servicios De Transportes Electricos del Distrito Federal (STE), begins operation. It is responsible for trollybuses and lightrail services in Mexico City.
1962 · Library of the Congress of Mexico inaugurated

In 1962, the dilapidated building is bought by the government and refurbished. The Library of Congress of Mexico takes place of what was formerly a convent.