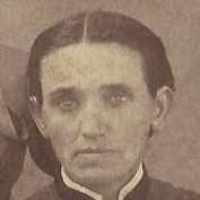 The Life Summary of Isabella Roberts

When Isabella Roberts Newby was born on 7 January 1844, in Thornley, Durham, England, United Kingdom, her father, John Newby, was 31 and her mother, Isabella Smurthwaite, was 37. She married Hyrum Roylance on 4 May 1867, in Salt Lake City, Salt Lake, Utah, United States. They were the parents of at least 5 sons and 5 daughters. She lived in Monkwearmouth, Durham, England, United Kingdom in 1861. She died on 31 December 1895, in North Ogden, Weber, Utah, United States, at the age of 51, and was buried in Ben Lomond Cemetery, North Ogden, Weber, Utah, United States.

Put your face in a costume from Isabella Roberts's homelands.

Journal History - 10 Jul 1866 "The New York Evening Post" of this date published the following: The Mormon Emigration movement from Europe to Utah is now in full progress and within a month past, fo …