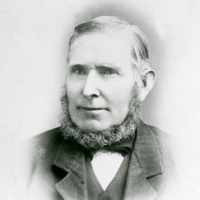 When John Vickers was born on 16 December 1822, in South Clifton, Nottinghamshire, England, United Kingdom, his father, Thomas Vickers, was 27 and his mother, Frances Tewson, was 28. He married Ann Lacey on 9 March 1847, in Norwell Woodhouse, Nottinghamshire, England, United Kingdom. They were the parents of at least 5 sons and 6 daughters. He lived in Eagle, Waukesha, Wisconsin, United States in 1870. He registered for military service in 1855. He died on 6 March 1919, in Nephi, Juab, Utah, United States, at the age of 96, and was buried in Vine Bluff Cemetery, Nephi, Juab, Utah, United States.

English: occupational name for the servant of a vicar (see Vicker ). It may also represent an elliptical form of a topographic name. Compare Parsons .Irish and Scottish: Anglicized form of Scottish Gaelic Mac á Bhiocair or Irish Mac an Bhiocaire; see McVicar .

(Partially written by Sarepta) I was born Jan 11, 1869 at Nephi, Juab Co, Utah. My father’s name was John Vickers, and mother’s name was Ann Lacey. They were both born in England. They had their en …