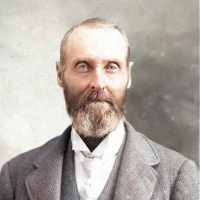 The Life Summary of Joseph Hill

Put your face in a costume from Joseph Hill's homelands.

Story found on lds.org pioneer stories. Joseph Hill Richards was born on 5 December 1841 in Toronto, Canada, to John Richards and Agnes Hill. As new converts to the Church of Jesus Christ of Latter …