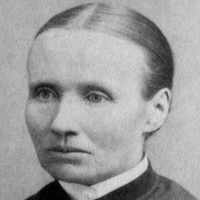 The Life Summary of Anne Sophia

When Anne Sophia Nielsdatter was born on 28 March 1839, in Kirke Sonnerup, Voldborg, Copenhagen, Denmark, her father, Niels Pedersen, was 29 and her mother, Maren Pedersdatter, was 28. She married Christian Larsen in 1862, in Atlantic Ocean. They were the parents of at least 4 sons and 6 daughters. She lived in Kirke Sonnerup, Roskilde, Denmark in 1850 and Brigham City, Box Elder, Utah, United States in 1870. She died on 2 September 1892, in Georgetown, Bear Lake, Idaho, United States, at the age of 53, and was buried in Georgetown, Bear Lake, Idaho, United States.

Put your face in a costume from Anne Sophia's homelands.

History of Christian Larsen Born March 10, 1826 Enroute to America & Utah 1862 A Danish Lad By Blanch Harrison Christian Larsen, Sr. was a typical Danish lad working for that which mean …