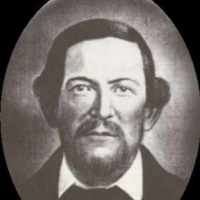 The Life Summary of Johann Georg

When Johann Georg Staeheli was born on 6 February 1825, in Amriswil, Thurgau, Switzerland, his father, Johannes Staeheli, was 34 and his mother, Elisabeth Thalmann, was 22. He married Sophia Barbara Haeberli on 17 June 1849, in Amriswil, Thurgau, Switzerland. They were the parents of at least 3 sons and 5 daughters. He died on 23 April 1881, in Santa Clara, Washington, Utah, United States, at the age of 56, and was buried in Santa Clara City Cemetery, Santa Clara, Washington, Utah, United States.

Put your face in a costume from Johann Georg's homelands.

Stories from the life of George Johann Staheli

In the Sunday morning meeting of the October 1861 general conference, George A. Smith stood at the pulpit and read, without advance to anyone, the 309 names of those who had been selected to relocate …