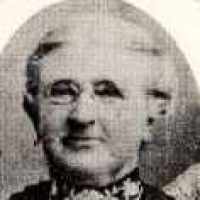 The Life Summary of Alice Penniston

Put your face in a costume from Alice Penniston's homelands.

lice Peniston Wasden was born in Ashton, Yorkshire, England, August 29, 1842, the first child of Thomas and Mary Cocum [sic] Wasden. At the age of five she entered school, but her schooling was very l …