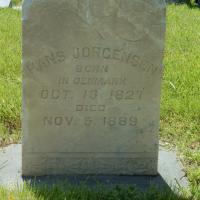 When Hans Jørgensen was born on 13 October 1827, in Øster Hæsinge, Sallinge, Svendborg, Denmark, his father, Jorgen Nielsen, was 30 and his mother, Pernille Pedersdatter, was 28. He married Marie Dorthea Brink on 5 April 1856, in Stege, Mønbo, Præstø, Denmark. They were the parents of at least 5 sons and 5 daughters. He lived in Espe, Sallinge, Svendborg, Denmark for about 6 years and Dronninglund, Hjørring, Denmark in 1860. He died on 5 November 1889, in Bear River City, Box Elder, Utah, United States, at the age of 62, and was buried in Bear River Cemetery, Bear River City, Box Elder, Utah, United States.