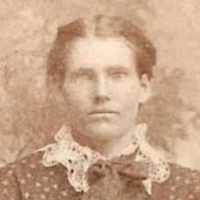 The Life Summary of Fannie Jane

When Fannie Jane Beard was born on 28 May 1855, in At Sea, her father, William Beard, was 57 and her mother, Mary Matilda Holt, was 26. She married Frederick John Collings on 13 December 1872, in Springville, Utah, Utah, United States. They were the parents of at least 2 sons and 7 daughters. She died on 7 February 1933, in Rose, Bingham, Idaho, United States, at the age of 77, and was buried in Idaho Falls, Bonneville, Idaho, United States.

Put your face in a costume from Fannie Jane's homelands.

I was born July 25, 1880 in Washinton County, Utah. I am the son of John Arnold Mangum & Mary Ellen Crow. There are two children in the family older than me. They are William Orin and Mary Jan …