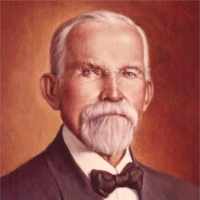 JOHN BUSHMAN 1843-1926 Prepared by his granddaughter Lenore B. Carpenter