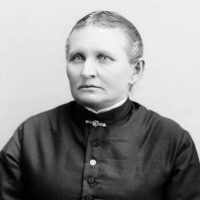 English: nickname from Middle English bogeys ‘boastful or haughty’. The name (in the forms Boge(y)s, Boga(y)s) is found in the 12th century in Yorkshire and East Anglia, and also around Bordeaux, which had trading links with East Anglia.

Taken from history compiled and written by Melva Brown Perry, a granddaughter-in-law in 1963 Mary Boggs was born 12 Apr 1843 in Nauvoo, Hancock, Illinois. Her father, Francis Boggs. came to Utah wi …