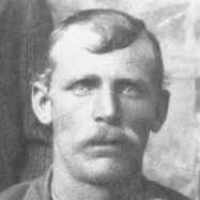 Everyone always called him “Billy”. There were probably some people who did not know his name was James William. He was slight of stature with dark eyes and hair. He even had small feet wearing onl …