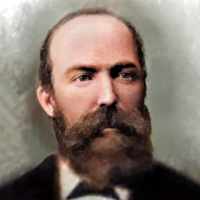 The Life Summary of James Lovett

Put your face in a costume from James Lovett's homelands.

English and Scottish: nickname from Middle English bunting ‘corn bunting’, perhaps used of a short, plump person. Compare Bunt and Scots buntin ‘short and thick’, Welsh bontin ‘rump’, bontinog ‘large-buttocked’.History: Sarah Bunting (1686–1762), born in Matlock, Derbyshire, became a noted Quaker minister in Cross Wicks, NJ. It is believed but not certain that other members of her family, including her father, John Bunting, came with her to NJ sometime before 1704, when her marriage to William Murfin is recorded.

I Martha Mariah Myers Hancock was born 9th of February 1858, at Salt Lake City. My father George Myers, of Swiss -German decent was born March 2, 1805 in Pennsylvania. He was the only one of his fam …