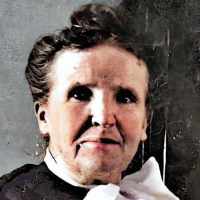 The Life Summary of Esther Elizabeth

Put your face in a costume from Esther Elizabeth's homelands.

English: variant of Steele .Americanized form (translation into English) of German Stahl and Swedish Ståhl or Stål, all meaning ‘steel’.

Esther Elizabeth Steel immigrated on 08 Apr 1854 on the ship Marshfield from Liverpool with the church leader William Taylor, Arrived 29 May 1854 in New Orleans, Louisiana. Ship: Marshfield Date of D …